Patrick Jambon examines the connections between imagination and reality. He is aware of the absurd of existence; with a nonchalant smile he moves in a world of constant (spatial) metamorphoses. The ironic alienation and revaluation of the utensils of everyday life is the artistic foundation for the arrangment of the props and attributes used by the artist. The life forms in the utopia seem cloned, products of bioinformatics, extraterrestrial, androgynous and filled with indifferent ecstasy, humanity and home are like failed jokes. (Michael Voets, Kunstraum Duesseldorf)

Patrick Jambon studied at the Fine Art School of Lyon, at the Academy of Art in Düsseldorf with Nam June Paik, at the Academy of Media Arts in Cologne and at the University of Fine Arts Berlin. Since 1990, he has held exhibitions and actions in different countries of Europe, America and Asia.

Presented with the generous support of the consulate general of France, Guangzhou and l'Institut Français, Beijing. 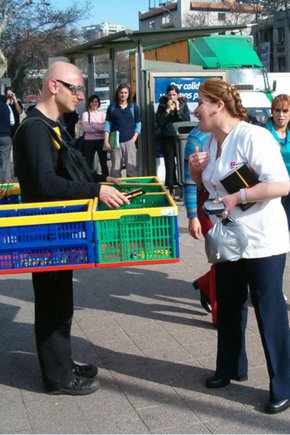